Luang Puu (LP) Sao together with LP Mun was one of the founders of the tradition of Forest Meditation monks of Thailand.

The revival of the Thai Forest Tradition in the late nineteenth century was an attempt to return to the lifestyle and training of the Buddha’s time. The founders’ intention was to realize in their own hearts and minds the inner peace and wisdom of the Dhamma. They abandoned busy village monasteries for the peace and quiet of nature. The Vinaya was followed strictly, emphasizing the importance of every detail. Monks lived without money, accepting whatever was offered, and patiently enduring when nothing was. Ascetic practices (the thirteen dhutaṅgas) recommended by the Buddha were instituted as part of the lifestyle. These included eating only one meal a day from one’s alms bowl, wearing rag robes, and living in the forest, in cemeteries, or in simple shelters.

The monks would often wander barefoot through the countryside, seeking places conducive to meditation, carrying their few possessions: an alms bowl, three robes, a klot (an umbrella with a mosquito net, which was hung in the forest and used like a tent), and a few personal requisites.

From LP Sao, LP Mun, and their numerous distinguished disciples became a legacy of powerfully relevant examples of an uncomplicated and disciplined way of life. Their teachings were directed towards those who wish to purify their minds by living the path of practice taught by the Buddha. The very heart of the Forest Tradition is the development of meditation. By cultivating deep states of
tranquility and systematically investigating the body and mind, insight arises into the true nature of suffering and the way to its end.

After LP Sao’s cremation, his bone fragments were distributed to people around the Thai provinces. And according to his followers, they transformed into crystal-like relics (Pali: sarīradhātu) in various hues.

The following information about LP Sao is gleaned from various sources and is by no means a full account of the life of this great teacher. Because his was a very reclusive life style, and because he was not given to preaching long sermons, preferring to teach by example, LP Sao did not have as large a following of disciples as LP Mun. Hence, records of his teachings are also few and far between.

LP Sao was born in Baan Kahkhome, a village in Central Ubon Ratchathani, on 2 November 1859. His father, Taa, and his mother, Mo, had 5 children. At age 12, LP Sao started living in the village temple, Wat Tai (formally named Wat Phra Chao Yai Teur). He was ordained as a novice monk at the same temple at age 15. While at Wat Tai, he studied the Thai, Pali, and Khmer languages.

He was ordained as a bhikkhu in 1879 and stayed at Wat Tai for 10 years. In 1889, he met Chao Khun Devadhammi (Mao), a Dhammayut monk in Ubon Ratchathani, who was the ﬁ rst monk to build a Dhammayut temple, Wat Sri Ubonrattanaram, in the Northeast region of Thailand. LP Sao was impressed by Chao Khun Mao’s teachings and later re-ordained as a Dhammayut monk with Phra Khru Taa Jotipālo as his Preceptor and Chao Athikan Sita Jayaseno as the Announcing Teacher.

LP Sao devoted himself to meditation practice and showed great character in terms of tenacity, calmness, and humility. He was deeply mindful of his words, and he also taught others to practice along those lines. LP Sao always wandered on thudong, looking for new peaceful and forested locations to meditate, both in Thailand and Laos.

Between 1891 and 1893, he wandered to Kambong village in Ubon Ratchathani and met LP Mun, who, at that time, was a young layman. LP Mun was very impressed by LP Sao’s teachings and became a monk under his tutelage. Thus, LP Sao is considered a great teacher in the Dhammayut sect in Thailand.

LP Sao always emphasized ānāpānasati (mindfulness of breathing) as a beginning meditation technique, anchoring the mind to the breath with the recitation of the meditation syllable, “Buddho.” From there, he taught how to transition the mind from access concentration (upcāra samādhi) to full absorption concentration (appanā samādhi). He also taught mindfulness immersed in the body (kāyagatāsati) as a way to be fully alert and aware of the body’s movements, to contemplate every part of the body, and to realize how one’s own body, like everybody else’s, will eventually have to be discarded. Once the practitioner realizes that this body is an accumulation of discarded bodies of others (i.e., from having consumed the meat of animals, etc.) that is when the practitioner reaches the stage of asubha-kammaṭṭhāna (contemplation on the foulness of the body).

At that point, the practitioner can start to dismantle the body into the four basic elements of earth, water, air and ﬁ re, which is a milestone for the samatha- kammaṭṭhāna practitioner. To develop the mind further, one should contemplate the three perceptions of inconstancy, suffering/stress, and not-self. LP Sao always emphasized these two contemplations, along with devotion to and tenacity in the practice so that one could gradually advance in gaining true discernment in Dhamma.

Between 1916 and 1921, LP Sao stayed at Cumpa cave in Mukdahan and spent the pansa (rains residence retreat) with LP Mun. On the day approaching the end of the pansa period, while LP Sao was meditating and contemplating the Four Noble Truths, he attained awakening. He turned to LP Mun, saying, “I no longer desire to attain the state of the ‘silent Buddha’ (Pacceka Buddha). I have seen Dhamma for what it is.” LP Mun was truly impressed by these words of his and knew then that LP Sao had reached nibbāna.

LP Sao passed away while he was bowing in respect to the Buddha (during the third bow) in Wat Ummattayaram’s main shrine hall in Nakhon Champasak Province, (now part of Laos), on Tuesday, 3 February 1941. LP Jia Cundo was present with him when he passed away. LP Sao was 82 years old and had been in the Saṅgha for 62 years. His disciples conveyed his remains to Wat Buraparam in Ubon Ratchathani and held the cremation in April 1943.

The following are excerpts of recollections from some of the Ajaans regarding LP Sao’s teachings:

“Devotion comes through practice, not through the words of others. Why would you ask me to preach when you don’t observe my actions or follow the practice when I display it to you? When that’s the case, will you listen to what I preach?”

“Continue to devote yourself to the practice and then you will succeed in line with it.”

“If you don’t dig the well deep enough, how can you reach clean, potable water?”

“No matter how still the air is in the sky, the birds will always need to exert force in order to ﬂy.”

“Good and bad exist only in the world. Beyond this world (i.e., upon attaining Awakening), there is no good and no bad.”

LP Sao was a monk of few words. His sermons were very short and concise, such as “Listen! Pure body, pure mind, pure words, pure thoughts. Always keep purifying yourself.”

LP Sao was very strict in his adherence to the monk’s code of discipline. He was a true role model in tenacity. Every day after the meal, he would walk to his residence to get a tumbler and start his walking meditation till evening. He would not meditate in his kuti (hut) and would not rest in his meditation seat.

LP Sao preferred to teach Dhamma through action rather than words. His disciples had to follow the following routine: bedtime at 10pm, wake up at 3am. Speciﬁc times were allotted for restroom and shower. This was his strategy to build the power of resolve. At times it would take an entire morning to go for alms, and by the time the monks returned to their forest dwellings from the alms round, it could be 11 a.m.

“Always contemplate death. Whether human being or animal, all will face death. Whenever there is birth, there is death. They are the two sides of the same coin.”

“We are fortunate to be born as human beings. So we should not engage in immoral activities as if we were animals, because once human morals go very low, it’s more harmful than being an animal. Life in hell, after the death of those who live with no virtue, is more torturous than life as animals. Don’t create bad kamma.”

LP Lui talked about the close and deep respect LP Mun had for LP Sao. As LP Mun had been with LP Sao since he was ordained as a novice, LP Sao always called LP Mun, “chao” and referred to himself as “koi,” terms in the Isaan dialect used between two individuals who are very close to each other. LP Sao was a teacher full of compassion and goodwill. He trained and led LP Mun and Phra Ajaan Nuu (of Wat Srapathum, in Bangkok) to advance in their meditation practice. 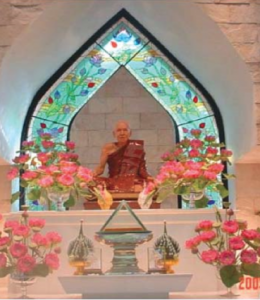